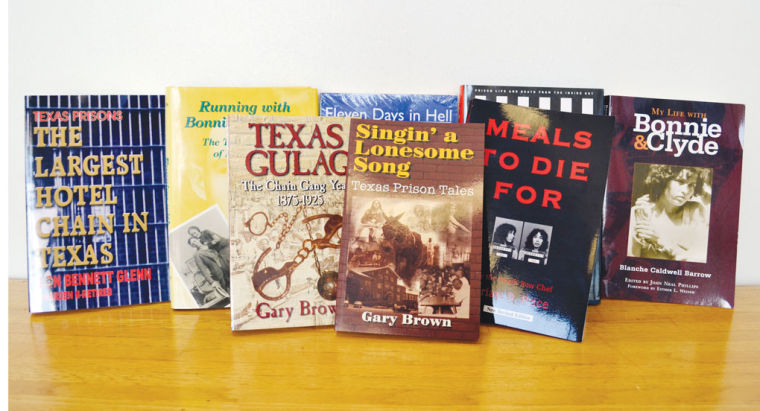 Buy It Now. Add to cart. About this product Product Information Texas convicts and inmates have made the Texas prison system the most colorful in the world over the past years. Additional Product Features Dewey Edition. Gary Brown's book of prison tales is an extremely well written, captivating no pun intended collection of stories about the various inhabitants who have made up the history of the Texas prison system.

The material is rich, varied and well researched Show More Show Less. Add to Cart. Any Condition Any Condition. See all 5. Ratings and Reviews Write a review.


Most relevant reviews. Best Selling in Nonfiction See all.


Secret Empires by Peter Schweizer , Hardcover Save on Nonfiction Trending price is based on prices over last 90 days. You may also like. A Song of Ice and Fire Books.

40 Saddest Country Songs of All Time

Books Gary Larson. Humor Books Gary Larson. Books Gary Larson Collectibles. Paperback Cookbook. This item doesn't belong on this page. Bobble heads of them might be hot item. TDCJ have missed a trick though, they could have got the inmates to make the dolls The offenders the correct word already make TDCJ enough money. They charge for everything.

Pictures, commissary, which they have to buy everything,except the White 2-piece uniform they are issued.

What they need to do is not add insult to injury. They need to become more about rehabilitaion instead of punishment. The offenders are already being punished. I know if my husband had gotten some sort of cousiling instead of just being locked up,he might not have been back there in the first place. Post a Comment. This work is licensed under a Creative Commons License. Contact: gritsforbreakfast AT gmail. Finally, ladies, the Valentines gift for the man who you thought already had it all.

Order soon, while supplies last! One wonders: Do they come in multiracial versions? You can also buy wallets, belt buckles or an inmate-made teargas case. For you eggheads out there who aren't interested in purchasing a belt buckle the size of a five-year old's cranium, there's also an interesting list of books about Texas prisons from the museum bookstore. In this book Donald R.

Walker examines economic, social, and political aspects of late nineteenth and early twentieth-century Texas that resulted in the leasing system and its eventual demise. That's a history I guess I vaguely knew about - renting out prisoners' labor to corporations, or God knows who else as a profit-making scheme for the state, but I've never seen an historial examination of the subject. That one might be worth adding to the list if I could get through the books on it now. It was described thusly on the museum bookstore website: Texas convicts and inmates have made the Texas prison system the most colorful in the world over the past years.

There was a famous gunslinger in the 's and a burlesque stripper in the 's. There were notorious gang members in the thirties, a Kiowa Indian chief, a blues musician, an escape artist, and a Mexican vaquero. They include inmates and prisoners of war supplying materials to the Confederate army and convict laborers building a state railroad and quarrying granite for the beautiful state capitol in Austin.

Both those sound like good reads, but I still can't get over the idea that somebody at TDCJ got the idea to have prisoners make these bobble head dolls and sell them at the Texas Prison Museum. I don't know that there's anything wrong with it, per se, really it just strikes me as odd, and kinda dopey. OTOH, thank God somebody in the prison system still has a sense of humor.

On Tuesday, they caught me with a file. On Wednesday, I'm in solitary. On Thursday I start on bread and water for a while. I've got stripes, stripes around my shoulders. I've got chains, chains around my feet.

And them chains, them chains, they're about to drag me down. Labels: TDCJ. Newer Post Older Post Home. Subscribe to: Post Comments Atom. Preview Powered by FeedBlitz. Grits is a hobby, but donations help cover newspaper subscriptions, periodic travel, open records fees, etc.. Donate if you can! When I have resources, the blog can do more stuff!